10 Paris Attractions- What's Worth It & What's Not

Visiting Paris can be very overwhelming, especially when you don't have a ton of time, as there is a lot to see! Some of the famous sites are free to visit, others have admission, and many of them offer student discounts. When deciding where to spend your time, it's helpful to know what sites are close to each other and what is worth spending money on. After visiting three different times, I've seen many of the city's main attractions, and decided what's worth it and what's not...

As the most iconic attraction of Paris and possibly even France, I think you have to see it at least once. I've been, at least briefly, each of the three times I've been to the city, just because I feel like it's an iconic thing to take pictures of. People feel differently about going up into the tower itself... My thoughts are that there are plenty of other tall places to look at the city that don't charge you so I wouldn't spend the money on it but that's your call of course.

Again, another iconic site of Paris, but if you don't like art an museums, you're better off sticking to a picture by the pyramid outside, and just pretending that you went inside. We went on our first visit, and there are certainly some cool things to see, but art isn't really my thing so it's not something I would probably do again. Also, if you're going just to see the Mona Lisa, save your money... It's a lot smaller than you think and it's incredibly underwhelming.

This was one of the coolest things I think we've done in Paris. If you get the chance to go to a show at the Moulin Rouge, DO IT! Be aware that it's not really a family friendly show (the family at the table realized this when the dancers came out topless for the second song)! However, if you won't be able to go to a show, I don't particularly think that it's worth going out of your way to see. If you decide to go to the Sacré-Cœur, the Moulin Rouge is only a 10-15 minute walk, so that could make a good combo for sight-seeing.

Unfortunately, because of the damage caused by the fire last spring, it's no longer an option to go into Notre Dame, which is unfortunate because it is a magnificent building. When it was an option, we waited in line for 10-15 minutes to get inside, which I would say was worth it because you still get to enjoy an amazing view of the exterior while you wait. But now that going inside isn't an option, it's even easier to admire the building from across the street.

One thing I would recommend would be to take the time to walk on the sidewalk all the way around the building to see where the damage is being repaired. It's pretty cool to be able to see the work being done to repair such an iconic building.

This is one of those other really high places with a great view of the city that doesn't require anything but a willingness to climb a lot of stairs. The one thing I'd recommend for this is that you go after it's dark. I've been there during the day, and I've been there at night, and it's much cooler at night to see it lit up. There is also an amazing view of the city when it's lit up at night, as the Sacré-Cœur is up on the highest point of the city.

This one is pretty easy to see, since it's located in the middle of a giant cul-de-sac. It's very popular to stand on the sidewalks around the outside of the cul-de-sac to take pictures with and of the Arc. However, if you're looking to get up close and personal, there are two entrances to an underground tunnel that will bring you up in the inner section of the cul-de-sac right next to the Arc. (Again, you can pay to go the the top, but you know my thoughts on paying to go see things from high places.)

The first thing I did in Paris when I visited for the first time was take a nap in the Tuileries Garden. Especially if you're going to go to the Louvre, it's worth walking down the street to enjoy the park. There are plenty of places to sit and enjoy the sun, and occasionally a pop-up fair or market. When we visited in the summer there was a fair in the park with lots of food and rides that was totally worth the stop! If you're a runner, this is also a great place to go for a run. Lots of wide paths, and it's big enough that you can run around and explore a little.

The gardens include the palace and other small buildings in addition to the gardens and fountains. I don't know if it's a regular event, but right now there is an exhibit on the fence around the garden with pictures of planets and other things in space (with lots of cool information... in French). I would say these gardens are worth it if you're looking for a place for a picnic, or just to stroll through some gardens. However, these gardens are much smaller than the Tuileries Gardens, so planning on running in them isn't really worth it. 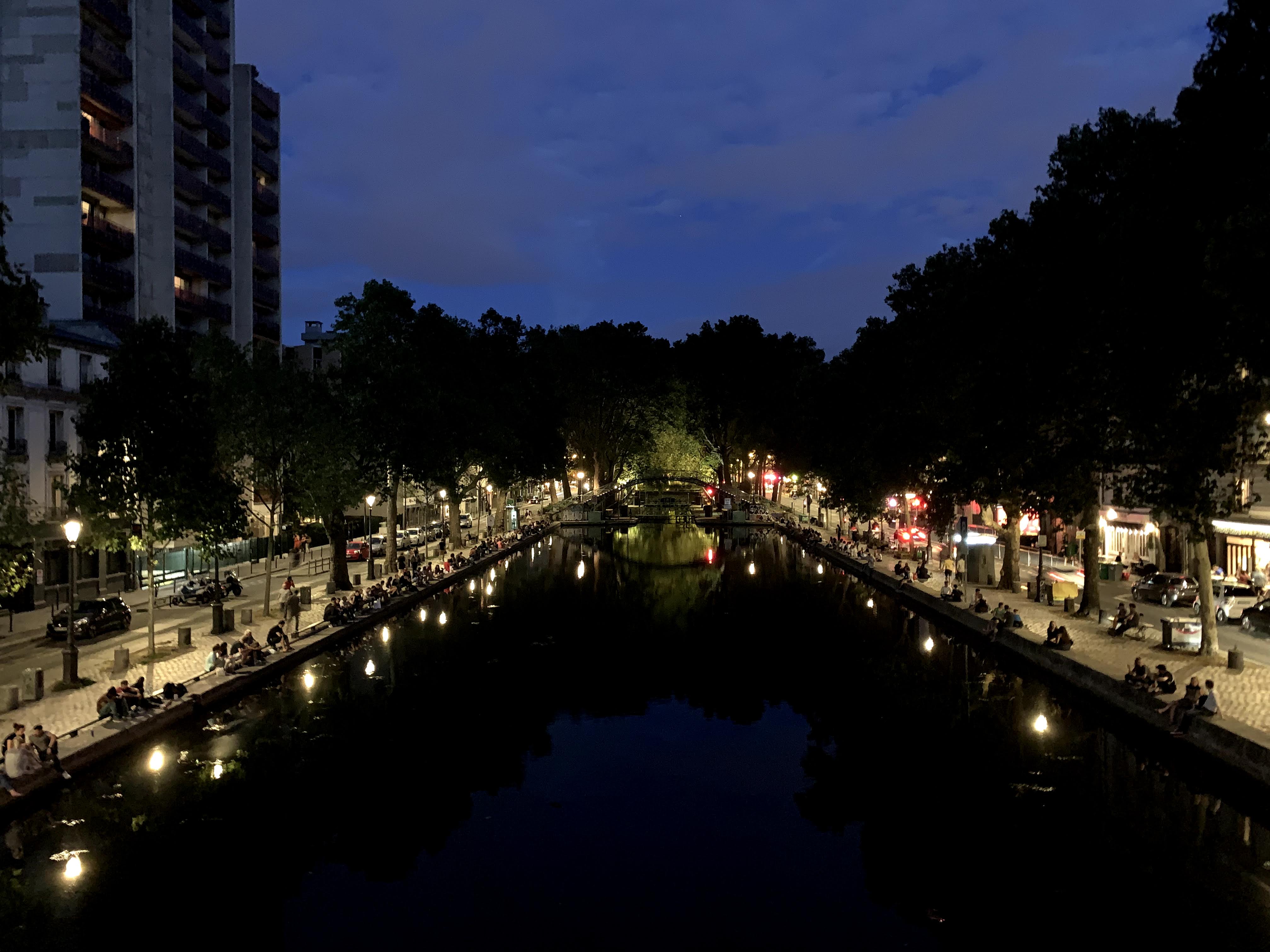 This was a super cool find that we stumbled on while wandering around one evening. The canal is an awesome way to explore the exciting, social night life of the city. All along the canal, small groups of friends gather to eat dinner, play cards, talk or drink wine. This is totally something I would recommend doing if you want to enjoy an authentic French evening. (Note: if you're planning on doing this, I would suggest that you buy your wine ahead of time... We tried to go into one of the many little grocery stores that are in the area to buy some, and for some reason they don't sell alcohol after a certain time so we were out of luck!)

This was another place we stumbled upon while winding our way down from the Sacré-Cœur. Kind of a cool old cemetery, not anything I personally would go out of my way to see, but again, something worth stopping by if you're in the area! There are a few graves of famous French people in the cemetery, including François Truffaut, a famous movie director whose grave sites are decorated with tokens of fans' affection. (Note: The cemetery closed every night at 6, so if you go to Sacré-Cœur later in the day, you might not make it.)

Hopefully this is helpful for your next visit to Paris. Prioritizing your visits and grouping sites together for multiple stops in one trip can help you see everything you want to get to while minimizing the stress!

5 Things to do at Home Since You Can't Travel